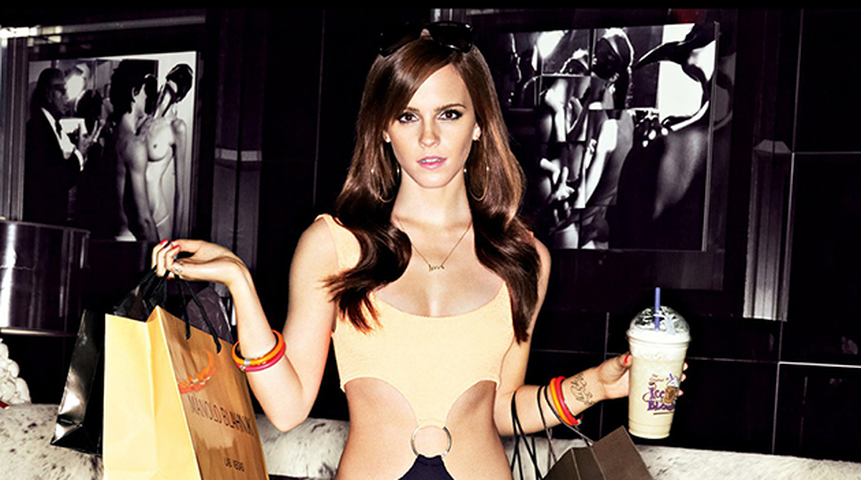 For more than a decade, Emma Watson was known to the world as the clean-cut Hermione in the multi-billion-dollar Harry Potter franchise. Now, we're introducing the 22-year-old superstar as you've never seen her before. Watson talks stardom, sex and stalkers with Dylan Jones as well as poses for a stunning photo shoot in character as Nicki, her pole-dancing Valley vixen in Sofia Coppola's The Bling Ring.

There is a funny, no doubt apocryphal story concerning one of Emma Watson's first classes as a freshman at Brown University in the autumn of 2010. She had decided to move to Brown, in Providence, Rhode Island, in the hope of stepping back from the spotlight caused by the extraordinary amount of attention she had received due to her performances as Hermione Granger in the Harry Potter series.
AdvertisementIn her class, Watson, who was sitting near the front of the room, stuck her hand up to answer - correctly - one of the questions posed by the lecturer. To which a student from the back of the class shouted, in the worst kind of sotto voce, "Ten points for Gryffindor!"

Watson has been living with this since she was ten, almost 13 years ago, and having spent most of her life in the limelight, has developed something of a brilliantly polished protective shield.
Having interviewed dozens of actors and actresses in my time, I have become used to the ways in which they try to act courteous and engaged when all they really want to do is bolt out of the room, back to their trailer, back to their partner, or, in some cases, back to their hotel room in order to spend the rest of the day with their head buried in a bag of cocaine.


Most are polite, and play the "I-win-you-win" game, in which the journalist scurries back to his lair, armed with enough good copy, colour and professionally delivered candour to conjure up a celebrity profile that doesn't read too much like all the other ones about the person they've just met. And usually it works: I've long since stopped being amazed by how easy it is for celebrities to convince journalists that they have made a "connection", hoodwinking them into believing that their relationship has now been re-calibrated to such an extent that they are no longer master and servant.
Actors are usually contractually obliged to promote a film, so if they have been forced to sit down with the Mail On Sunday, theIndependent or the New York Times, they obviously want to spend as little time doing it as possible. Occasionally, actors have the balls (or the misguided arrogance) to go against the grain and actually treat the interview as an encumbrance. I once interviewed Miranda Richardson in Blakes Hotel, London, for some film she was promoting and she couldn't have been less engaged. Didn't even pretend. Of course I found the whole thing particularly annoying, and said so in print, but in a way I secretly admired her.


Emma Watson has developed her own shield, naturally, although she acts in a completely charming manner, answering questions both on and off the record with deftness, wit and skill. In fact, she is extremely good company - delightful, really - and professional to a fault. It was less like an interview and more like a meeting, and I don't say that disrespectfully. We were there to do a job, a job that she - at least - did faultlessly.
In the flesh, Watson looks a lot younger than she tends to on film, which made me a little disconcerted, as there were moments when shedidn't look that much older than my eldest daughter, but then I would imagine my reaction is not unusual. The way she looks right now gives her an immense amount of power, which is why she is choosing her post-Potter roles incredibly carefully.
The film she is promoting is The Bling Ring, a true-life tale about a gang of audacious, rich, club-hopping, coke-hoovering Valley kids who stole clothes, cash and jewellery from various Hollywood celebrities - including Paris Hilton and Lindsay Lohan- motivated by little but vanity and celebrity. Shot in a docudrama style by director Sofia Coppola, Watson is the film's principal star, playing Nicki, a teen with an ex-Playboy model mother, played by Leslie Mann. Coming off the back of a decade of Hermione movies, this is a little like Julie Andrews deciding to play a stripper after appearing in The Sound Of Music, or former child star Natalie Portman appearing in a film about a menacing, sexually charged schizophrenic.