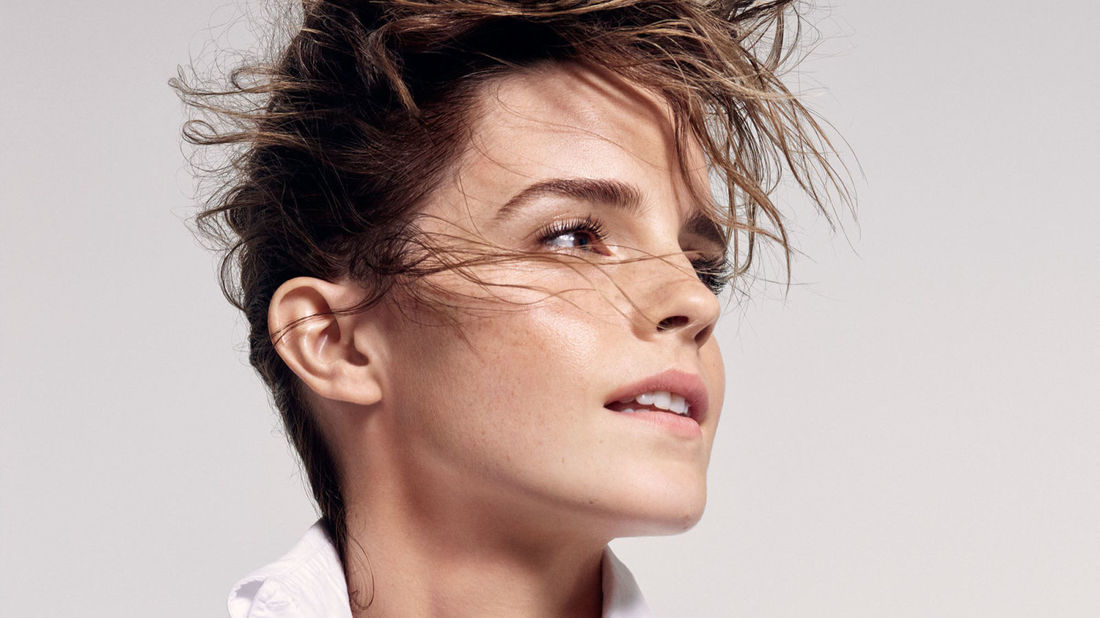 During Emma and Eve's must-read conversation - that will run for the next 4 days right here on ELLEUK.COM - Emma gets to the heart The Vagina Monologues, discussing its continuing relevance in 2017.
She also hears Eve's thoughts on Trump's America, the future of the women's resistance and the devastating and inspiring experiences behind her One Billion Rising campaign to end violence against women.

PART 2. "There's a profound emergency in America."Emma Watson: Are things changing with regards to the patriarchy?
Eve Ensler: I think what is sad is that the men in power still don't understand that the liberation of women is their liberation as well, because they're still hungering for domination. I think that desire for domination, that predatory mind-set, is destroying our world in every respect. Whether it's immigrants who are being denied entry after the U.S. bombed their countries, whether it's the greed of extraction of oil which devastates the earth, whether it's women's bodies endlessly raped and abused and denied reproductive rights - there's such a predatory mind-set at present. I think the younger generation were born with so many of the Rights that my generation didn't have, so they naturally took them for granted. Now when those rights are under siege, suddenly people are waking up and realizing, " We have to resist. We have to fight."
I think we're in a profound emergency in America. I think we had to hit rock bottom, so that we could address all the things that haven't ever been dealt with. We have to finally deal with the fact that this is a country built on genocide of the Indigenous people, this is a country built on slavery. This is a country rooted in misogyny. This is a country that does not respect, honor cherish and pay working people, (especially women) what they deserve. This is a country that has been committing imperialist wars for years on people around the world, killing them, raping them, destroying them economically and literally. It's a comeuppance - we're in a time of our karma coming to roost.
This moment is a huge opportunity to deal with our history and to say - "We are going to reckon with our past, make restitutions, be guided and transformed by our mistakes, reset our course. It's going to require protest, protection, planning and prophecy. Smack in the middle of the word emergency is the word emerge.
Emma Watson: So, lots of members of my book club sent in questions for you.... Anne would like to know: "What is it about the female reproductive organs that causes such debate?". I know it's a broad question, but in a nutshell, what do you think it is about the female reproductive organs that are causing all of this commotion?
Eve Ensler: I think women have never had the rights to their own bodies or desires. They have been objectified and abused by the state, the Church, family structures. We are slowly coming into freedom and choice. Choice over whether we have babies or don't, choice over sexuality and sex, choice over what jobs we will and wont do, choice over how we are respected and treated on those jobs. Choice to have our desire.
Emma Watson: Was there a hardest monologue for you to put together, and why was that one more difficult than the others?
Eve Ensler: I think that the Bosnia piece was the hardest piece to write. I had just come from the Bosnian War and I had been in Bosnia and Croatia for a period of time where I had been in refugee camps interviewing women who had been horribly raped in the war. That was my first time I had been in a war zone and the first time with women who were on the front lines, having been in rape camps. It was devastating. It was utterly devastating.
I think every time I performed that piece I would break down because I would remember those women, their faces and their stories. I went back to Bosnia years later to a town where one of the horrible massacres had occurred and the women in that town were performing 'My Vagina Was My Village' in a production there and it was a profoundly cathartic moment. Everyone weeping, actually wailing.
That piece still disturbs me and sadly it's still going on. How many women live in countries where rape is used as a systematic tactic of war? How many women have lost their minds and had their vaginas and bodies eviscerated during conflicts? It still continues and escalates in this neo-liberal global capitalist system where women's bodies become the landscape on which global wars for resources are fought.
Emma Watson: Neo-liberal capitalist is very true. Here's a question I like - and I'm interested in what you think about it - what do you think about the way boys are raised in our culture specifically?
Eve Ensler: I think being raised a boy in a patriarchy is almost more torturous than being raised a girl, because at least we are allowed to keep our hearts. We are allowed to feel, to cry, and we are allowed to connect. With boys, from the time you open your eyes, you are taught not to cry, feel, show weakness and not to ever let anyone know you have doubts, and so your heart is cut off. You are severed from it from such a young age. What has it done to our boys? It has turned them into soldiers and men capable of battery, rape. When boys are not allowed to feel their vulnerability or their tenderness, they become hard and uncompassionate. In 'Insecure At Last,' I said "Bullets are hardened tears.".