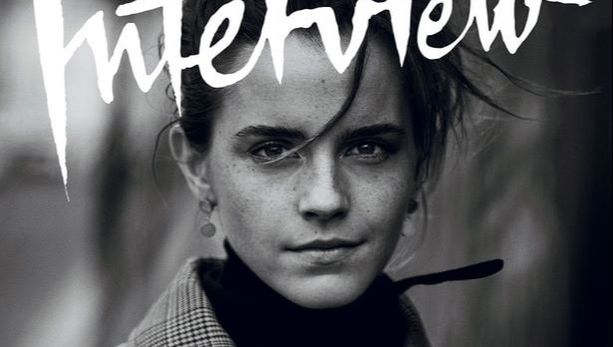 ​Growing up in the spotlight has taught Emma Watson the importance of separating her public persona from her private life.


Cast as Hermione in the wildly successfully Harry Potter franchise at just 9 years old, there was nothing Watson or her young costars could do to prepare themselves for being thrust into the spotlight.

“Dan[iel Radcliffe], Rupert [Grint], and I were kids when we got cast in this fairy-tale series, and what happened to us was kind of a fantasy story in itself,” Watson told Jessica Chastain for Interview Magazine’s new cover story.

“So the story of my life has been of public interest, which is why I’ve been so passionate about having a private identity,” she explained. “When I step into a character, people have to be able to suspend their disbelief; they have to be able to divorce me from that girl. And not having everyone know every single intimate detail of my entire life is part of me trying to protect my ability to do my job well.”

Protecting that identity can be daunting, but without it, Watson knows her career would suffer. “I know that I’m under a different microscope, a certain level of scrutiny, which I find really hard at times,” she revealed.

“And sometimes the fear of doing things is overwhelming. I get incredibly overwhelmed, and sometimes feel hemmed in by that, afraid of that,” she added. “But I know that if I live in that fear, then my life as an artist, as a human being, really, is over. Ultimately, it will silence me, and it will silence what is in me — which I have yet to explore and uncover.”

That fear wasn’t always there. When she was cast in Harry Potter, Watson said she remembered having “this fearlessness.” Now, as she faces more challenges in the spotlight, she’s made sure to push through her reservations. “Like in Beauty and the Beast, I sang for the first time,” she explained, adding, “And journalists would ask me, ‘Do you think you’re going to be able to pull it off?'”

With the weight of a major production on her shoulders, Watson said, “There’s an incredible awareness that I have to push through.” Likewise, before giving her 2014 U.N. address on women’s rights, Watson said had to battle through her nerves.

“The night before I gave my speech at the U.N., I was an emotional wreck. I thought I was going to hyperventilate,” she told the magazine with a laugh.

While the nerves are always uncomfortable, Watson said they serve a purpose. “No one likes feeling vulnerable and uncomfortable and weak,” she explained. “But I really have found that it’s in those moments when I go there that there’s a kind of magic.”