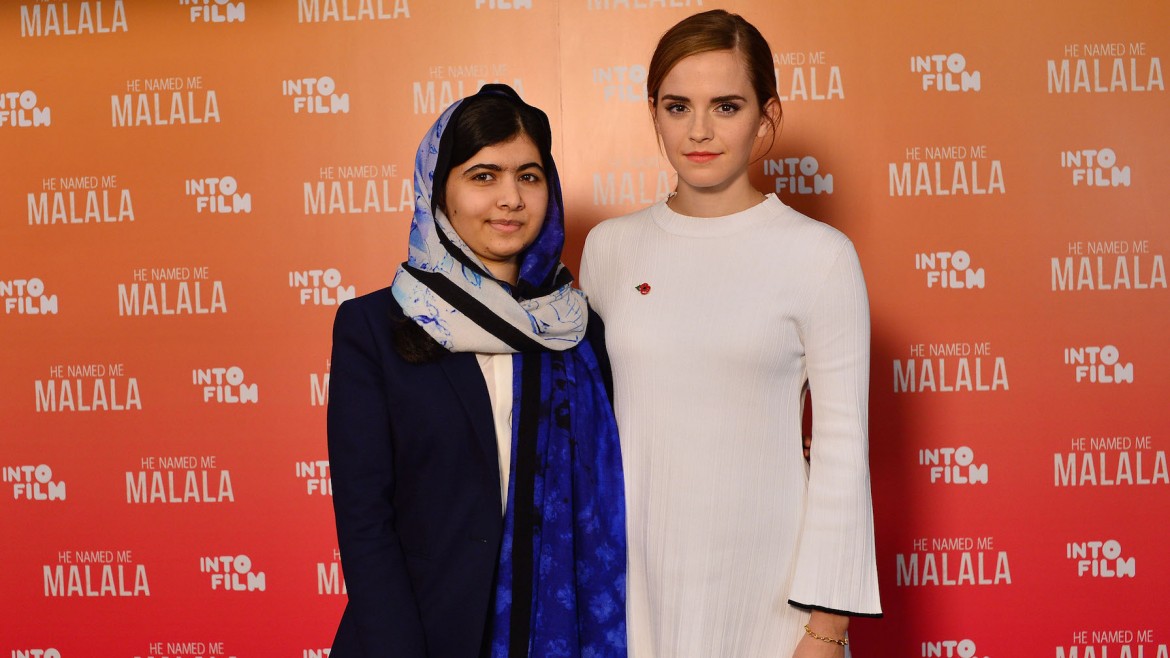 ​Just a day after Vogue's guest editor Emma Watson helped launch the #TimesUp campaign at the Golden Globes, the UN Women Global Goodwill Ambassador and Brown University alumni spoke with Nobel Peace Prize winner Malala Yousafzai, currently studying at Oxford University, about the importance of education.Emma Watson: “Thank you for doing this; I’m sure you’ve got a million things to do and essays to hand in.”
Malala Yousafzai: “No worries! Thank you for asking me and I’m really happy to do this. Also, I just followed the news about [the] Golden Globes and it was amazing, seeing all these women coming together, and it is just incredible, and you can see the change. You can actually witness it, it’s there, it’s happening. I was so happy to see that and thank you to you and all those other women who stood up. It made me so happy.”
EW: “Oh, thank you, I really appreciate that. It really felt that way in the room. You could feel the change. It was remarkable, and Oprah’s speech was amazing.”
MY: “Yes, you know when you start watching a video and watch it for two seconds and then—this was like, no, I can’t stop, I have to finish it. It gives you goose bumps; tears were coming to my eyes and I just thought: ‘Wow!’”
EW: “It felt like a really big moment. It really did. We’re doing it, it’s happening, Malala! We are making progress, we’re making small steps, but they’re steps, even in these slightly difficult and trying times. Last night was very heartening. I think you have to celebrate the wins at the moment. We have to celebrate when we do make a win in this climate. Today we are celebrating! So, you’ve recently started university. Yay!”
MY: “Yes!”
EW: “How does studying at university compare to studying at secondary or primary school for you?”
MY: “I think it’s completely different. Firstly, in primary schools you have to go to school every day and there are lessons, there is assigned homework, there is a teacher and you have all this regular work going on. There’s a pattern in it and it is a good way of learning, but when you come to university it’s completely different because all your teachers do is give you assignments and say: ‘Here’s the work – here you go’, and the rest is up to you how you do it: [whether] you want to go to the library and study books, [whether] you want to go to lectures, [whether] you want to do your own research ... and I think it’s just incredible. It’s really a time for you to manage your time; you are making constant decisions like: how should I spend my next hour? Should I go to a library? Should I go to a talk? Should I do something else? And I think it’s really about spending your time, really kind of equally. I think you’ll have done that in university as well, you will have gone through it. How much time to spend on parties? How much to spend on reading?”
EW: “Yes. Time management becomes even more important than it was at school, because you just have so much you dictate and you are really in charge of your education. It’s up to you.”
MY: “Yes.”


Malala Yousafzai speaking at the United Nations. Image credit: UNEW: “How does it feel to go to university knowing that you would be recognisable? Was that a little nerve-wracking?”
MY: “Yes. I was nervous in the beginning and I was excited, but then I was as nervous as I was excited and I was worried about how people would perceive me. How would everyone react to the fact that I’m there, and would they consider me as a student or how the media or the rest of the world has defined [me]. I just wanted to be a student, and a friend, and I’m so happy that happened because when I came here I made friends and I was going to lectures, doing my assignments and I was having tutorials and it just all felt normal, like: ‘Yes, this is a student, uni life.’ And I was really happy to see that.”
EW: “I’m really glad to hear that, I remember that as well. The first few weeks, you know when everyone got used to seeing me for the first time – it was a nerve- wracking time, but then once everyone gets used to seeing you around everyone kind of forgets about it and you become like everyone else.
So, I love this quote by Martin Luther King: ‘The function of education is to teach to one, to think intensively and to think critically. Intelligence plus character – that is the goal of true education.’ What is your vision of what a true education means to you?”
MY: “So, I’ve been thinking about this for a long time: what is education? And then what it means for a person. And for me, education is important definitely, because when I was studying in Swāt Valley [in Pakistan] and extremists came, they banned girls’ education, and then one morning I wake up and I realise that I can’t go to school. And I can clearly see that if I don’t go into that building, where I learn every day, that is my school... if I don’t go to school and if I don’t complete my education I will get married at an early age, I will have children, I will have grandchildren, I will become a mother, grandmother, but I will not get the opportunity to be myself, to be independent, to be making my own decisions, to be a woman.”
EW: “Yes!”
MY: “I used to look at it from that perspective and that was because I went through that situation, but even in general, like, firstly it is an empowerment for women, it is giving them independence, it is giving them a path to the future, but I am looking at it from a perspective, from a point of view where I was one of those girls who could not go to school. But also, in general, when I think about education I think it’s not just learning a subject or getting information, it’s also about critical thinking and also allowing you to question things – not only learning facts but it also makes you question. I think this is something really important, we should be questioning things. We should be talking about our society, whatever field this is, whether it’s science or technology or social studies, it’s all about questioning things and learning, and learning different perspectives and different views and that’s how I see education. But also, this whole structure of schooling that when you go there from age five, you sit together with all your students and you’re learning together, you have a teacher, and that whole environment really helps you grow as an individual, and by the time when you are 18 and you’re coming out of school you don’t realise, but if you look back actually you have developed yourself – you have developed your character, you have developed your personality, you are somewhere on a way to finding how to learn and what you want to do next in your life. So, it’s really a phase of growing up and getting to know yourself.”