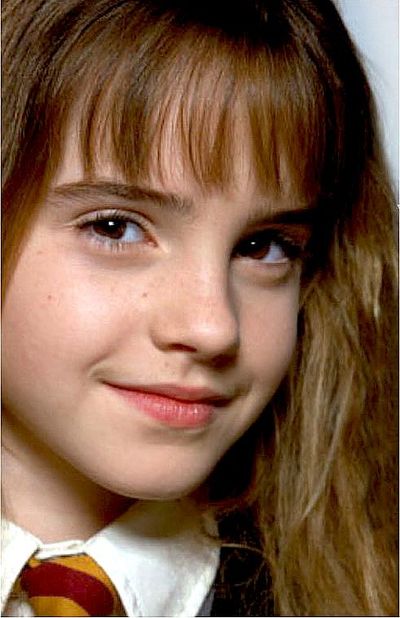 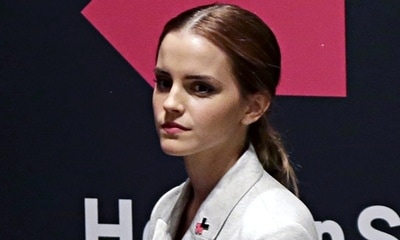 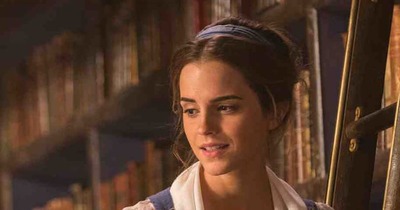 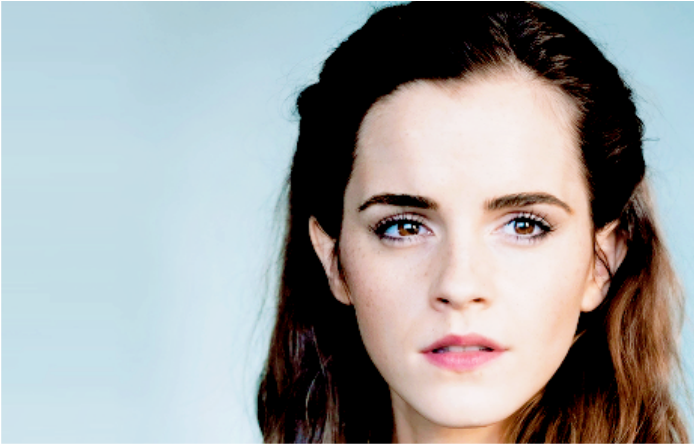 ​Credit Watsonuncensored for use of the transcript.


Here in a suite in the Corinthia Hotel in central London is Emma Watson; wearing a black Alexander McQueen dress with a whiff of S&M about the belt, she is here to discuss her latest project, a true-life thriller set in a cult in Chile during the Pinochet dictatorship. It shouts "serious cinema", another step in the carefully curated career of the girl known to the world for ever as Hermione Granger in the Harry Potter films. There are absolutely no owls in this cast.

Watson is now a woman of many parts - a UN goodwill ambassador, a founder of the equality campaign HeForShe and a feminist book club, and a model for Burberry and Lancôme. She has recently been inducted into the Oscar voting academy, and has also been rock-solid in her support for the black actress who is playing the grown-up Hermione on the West End stage in Harry Potter and the Cursed Child. "Can't wait to see Noma Dumezweni as Hermione on stage this year. #harrypotterandthecursedchild #2016," she tweeted, with a shower of heart emoticons.

As an actress, she has been on the big screen for 15 years, yet she is only 25. I realise that I have interviewed her three times, watching her grown up in public from a fuzzy-edged teenager to a sleek, sophisticated cog in the movie-making machine.

I first spoke to her with Daniel Radcliffe and Rupert Grint at Leavesden studios for Harry Potter and the Prisoner of Azkaban. Watson was 14, scruffy, jokey and direct, and talked about how much she likes Crookshanks, her stage cat. Later I met her at 19 on the set of the final Potter film, when all she wanted to discuss was English literature before she headed off to Brown University in America. Today the topic is Colonia Dignidad, a closed cult run by a Nazi German evangelist, which helped with the detention and torture of victims of the Chilean dictator Augusto Pinochet. In the film The Colony, set in 1973, Watson plays Lena, and air stewardess who goes undercover to join the cult and find her German boyfriend Daniel (Daniel Brühl, actor if Rush and Inglorious Basterds), who has been kidnapped.

Watson's previous post-Potter films, such as My Week With Marilyn, The Perks of Being a Wallflower and The Bling Ring, were decidedly lighter in tone - or sillier when we include Noah and the comedy This is the End. "We're definitely far from rom-com territory with The Colony - not that there's anything wrong with rom-coms," she says. "But it's pretty dark material. It was a really interesting paradigm switch - the fact that I got to play a girl who rescues a boy.

I hadn't been offered anything like that. It was nice, and about a piece of history I knew nothing about and was fascinated by," Watson adds. "I love Daniel Brühl. I think his performances are brilliant. I really wanted to work with him. The director [Florian Gallenberger] really seemed to care about the material, her spent five years researching and got to know members of the colony who were still alive, so there was a kind of integrity there which was really important to me." The subject is decidedly heavy, but Watson gives the impression still of lightness, with her high voice, pixie face and constant hand gestures. Although she can rock the red carpet when required, this is less screen siren and more eager student.

You can see how careful Watson has become aware that her tiniest opinion or slip can be magnified a millionfold on social media by the generation who grew up adoring her as a smart, swotty, feisty role model at Hogwarts.

Take the trailer for The Colony, released a few days before our interview, and made much of online in the Daily Mail's "sidebar of shame". "Emma Watson indulges in passionate display with Daniel Brühl as they roll around on the bed in new trailer for dark thriller," was the headline for this Pinochet movie. In fact, Watson gives a powerful, brave performance as an ordinary woman forced to commit extraordinary acts of sacrifice. "Steamy!" continued that paper. "How far she's come since her younger days as she puts on a magnificent display in the teaser." There's a nasty schoolgirl-gets-naked tone to it all.

I ask Watson is she's seen the piece, and say how annoying I found it. "Yes, three and half seconds of nude pictures which were not particularly risqué," she says, frowning. "It's deeply irritating" Then she pulls back, perhaps imagining the quote as a headline. "Well. Hang on. Actually no. Let me retract that. I think I used to find it more irritating than I find it now. I used to put a lot more value and a lot more weight on these things but I don't know if it's time or experience or just having been in there long enough, but it does irritate me. Silliness is all it is. You have to accept that there will always be a certain portion of the media who will want to sensationalise and pigeonhole me in a certain way."

She sighs, "I'm 25 now. I've been in 15 films in total and me kissing somebody else shouldn't be risqué or horrifying, but I think that will continue for a long time. There have been lots of advantages to being part of that franchise, and playing that role for a long time, but inevitably there are obstacles and that's one of them." She pauses. "But you just go, ach, whatever. Ultimately it doesn't seem to be coming in the way of me getting other work."

The Colony involved total immersion. Watson went to the real Colonia Dignidad, where political prisoners has been tied to metal beds and tortured with electric shocks in tunnels under the compound, which looked like a perfect farm above ground. "It was really eerie because the landscape is so beautiful. It feels like you're in Eden but there's this incredibly dark history. You expect there'll be this perfect pathetic fallacy and there will be a storm cloud, rain, lightning and thunder, and actually you arrive and birds are singing and you feel it would be a nice place to take a holiday. It's a strange unsettling contrast."

The part has its grim side too - there scenes of misogynistic violence in the cult, when women are beaten by rabid men as punishment for breaking the rules. Watson wore the pilgrim-style uniform of the camp for weeks, dull high-necked blouses and long skirts, a total contrast to her initial bright yellow Seventies air hostess dress.

After all that, Watson was keen to detox, and agreed to take the lead as Belle in Disney's live-action adaptation of Beauty and the Beast, which has now wrapped. Unlike many young actors, money is not a worry, with an estimated £24 million paid from Potter. (Well, that's the sum Grint is telling the taxman that he earned.) Thus she decided to take a year off from acting in 2016 to concentrate on setting up an online feminist book group - and to enjoy just hanging out in London. The club is called Our Shared Shelf, and her first choice is My Life on the Road by Gloria Steinem.

"It just came naturally for me to so - I kept reading all this stuff for work and had no one to talk to about it - and has been really fun setting up, reading people's thoughts, choosing each book and tracking down each author to ask them questions. It's like my little mission. I love it." There are more than 135,000 members.

When it comes to women's rights, Watson is a crusader, her Twitter feed is an example to young women, and she recently urged them to sign up and vote in the EU referendum. This year, she interviewed Steinem for 90 minutes on stage, discussing feminism in all its forms. "We should be creating lots of awesome, great alternatives to pornography," said the actress. Watson also discussed a website that uses scientific and academic research to better understand female sexuality, which has the orgasmic title of OMGYES.

Watson's own emotional life is largely kept under wraps. She was born in France to two English lawyers, but returned to Oxford aged five to live with her divorced mother and spent weekends with her father in London. The Oxford student link stayed, however, she dates Oxford student Will Adamowicz at university in America, and later Oxford rugby player Matthew Janney. This year she has dates the tech entrepreneur William Mack Knight.

While Watson is enjoying herself - and campaigning - her previous performances continue to roll our on the screen. One is another book adaptation, Dave Eggers' The Circle, in which she plays the lead as an employee of an all-controlling Google-like tech company, opposite Tom Hanks. Part of her still likes a touch of childish fantasy, however, and it sounds as though playing a somewhat feminist Belle with Dan Stevens as the Beast, was a delight.

"Frankly I couldn't do another thriller after The Colony - I'm joking that my nerves were in pieces, but I didn't want to do another edge-of-your-seat thing for a while, so Beauty did seem to be a perfect antidote, unapologetically romantic, optimistic and joyful. Singing and dancing teacups was exactly what I needed."

At the end of this third peek into the world of Watson, I can't help but be impressed; by her commitment to equality and worthwhile projects, her graceful rise from child star to adult, and her dignity under tabloid fire. Hermione would approve.